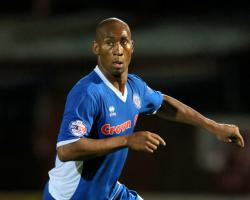 The 29-year-old was initially handed one of the longest suspensions in English football history following a sickening elbow on Oldham defender Peter Clarke last month.

The clash, which occurred on October 29, was missed by the referee before a Football Association independent regulatory commission delivered the 12-game ban.

However, Rochdale have confirmed that Andrew's punishment has been decreased following a meeting in London.

A statement on the club's official website read: "Following a hearing at Wembley on Thursday, Calvin Andrew's ban has been reduced to nine games.

"No further comment will be made on this matter."

Video footage emerged online after Andrew's initial ban, which showed the striker running towards Clarke and making contact with his head with an outstretched arm.

Clarke did not appear to see the contact coming - with the ball well clear of the area - before being left prone on his own six-yard box.

Journeyman striker Andrew joined Rochdale in 2014, with his deal at Spotland set to expire at the end of the season.

His original ban, if upheld, would have been the longest handed down by the FA for an on-field incident in the top four divisions since Joey Barton was given a 12-match suspension after he was sent off for QPR in their memorable final-day defeat to Manchester City in 2012.