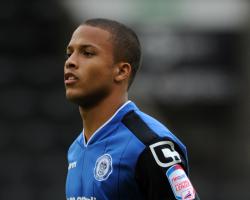 The 28-year-old announced on his Twitter feed on Wednesday evening that he is "cancer-free" after the nodular sclerosis Hodgkin lymphoma with which he originally was diagnosed in 2013 and battled successfully struck once again.

The player revealed the cancer had returned in March, but vowed to meet it head on.

He said in a statement: "I came back from a goal down before, not only to equalise, but to take the lead.

"This illness may have found an equaliser, but the quest for me to get the winner starts today and I can assure you I will get the most important win of all time."

Thompson underwent six months of chemotherapy after cancer first struck before returning to football in August 2014.

His second diagnosis prompted him to launch a fresh fight with the support of his wife Chantelle and daughter Thailula-Lily, his home-town club, manager Keith Hill and his team-mates.

He said at the time: "I will fight this life hurdle with the same belief, courage and desire as my previous battle."