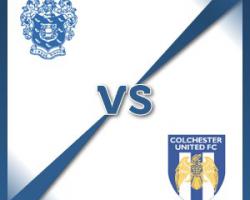 Rochdale V Colchester - view commentary, squad, and statistics of the game live.Same again for DaleRochdale manager Keith Hill could name an unchanged starting line-up once again for the home game against Colchester.Hill started with the same side that were unlucky to lose at Bristol City last weekend in the midweek win against Crewe and has no major new injury or suspension worries.Midfielder Stephen Dawson (calf), defender Olly Lancashire (ankle) and striker Calvin Andrew (knee) have missed out in recent weeks and are unlikely to feature.Goalkeeper Jamie Jones, on loan from Preston, made his home debut on Tuesday night and is expected to continue as Dale chase back-to-back wins at Spotland

Colchester boss Tony Humes is hoping teenage midfielder Tom Lapslie will be available.Lapslie has been struggling with an ankle injury that has kept him out of the last two matches, but he was close to returning for the midweek defeat to Notts County and could be in contention.Defender Matt Briggs recovered from illness to return on Tuesday night, while midfielder Sammy Szmodic shook off the effects of a bruised foot to play 75 minutes and will be monitored.Humes has no major new selection concerns as the U's, two points from safety, bid to avoid a third straight league defeat