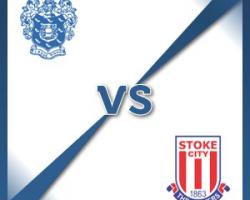 Rochdale V Stoke - view commentary, squad, and statistics of the game live.Hughes: Stoke will respect RochdaleMark Hughes is confident his Stoke side will not be caught cold on Monday night when they play Rochdale at Spotland just days after returning from warm weather training in Dubai.The Potters boss took his squad to balmy climes for a change of scenery as temperatures plunged last week.Returning to the cold to face the Sky Bet League One side in the FA Cup fourth round may come as a shock to their system, but Hughes is unconcerned."We are used to the weather in these parts and it won't take us long to get back into it," he said."Hopefully, the surface will be okay

We know we've got to go there, face the conditions and get on with it

It won't faze us

We will take the challenge on and make sure we get the job done."Hughes explained: "The training ground here is a little bit wet under foot at the moment and that obviously wasn't the case away, so we got some good work done," he said."We've had two days leading into the game on Monday, so the structure of the week works for us."The break has done us good

We've just come through Christmas, which takes its toll on everybody."It's key they are able to re-boot for the challenges ahead."The Welshman is preparing for Rochdale in the same way he would a Barclays Premier League match and insists the cup is important to his side."Even against Wrexham in the last round we had something like 10 internationals on the field of play," he said."It's a trophy we have a good opportunity to win

But you need a bit of luck in terms of opposition, and in games because sometimes it can hit somebody on the backside and you lose."Rochdale are doing well and are highly thought of, so it won't be easy."Stoke captain Ryan Shawcross is a major doubt due to a groin injury

The centre-half has not trained so far this week and while he is likely to do so this week, Hughes is unlikely to risk him.Forward Jonathan Walters is Hughes' only other doubt, with a minor back problem.Rochdale boss Keith Hill is hoping striker Peter Vincenti will be fit

The 28-year-old, who has a slight knee problem, has scored 12 goals this season, including the winner against Nottingham Forest in the last round.The only definite absentee is midfielder Matty Lund, who is likely to miss the rest of the season after dislocating his shoulder.Dale head into the game in fine fettle having won three games in a row