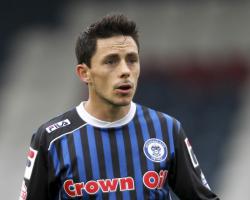 Away success for DaggersDagenham ended their long wait for an away win with a 1-0 smash-and-grab raid victory at promotion-chasing Rochdale.The Daggers, whose last victory on the road came at Southend in October, snatched the points thanks to Rhys Murphy's close-range finish on 63 minutes.The home side wasted a great early chance to score when Ashley Eastham's deflected header was blocked by Dagenham goalkeeper Chris Lewington

George Donnelly was left to apply the close-range finish from the rebound but the striker blazed over the crossbar from four yards.Lewington then pulled off an acrobatic save to keep out Donnelly's header and later blocked Matt Done's effort from a tight angle as Rochdale dominated the contest.However, Wayne Burnett's side showed more ambition at the start of the second half and took the lead when Luke Wilkinson's delivery from the left was turned in by Murphy.Scott Hogan had a header cleared off the line while Lewington saved another piledriver from Done to frustrate the home side's attempts to force an equaliser.The visitors should have doubled their lead, though, when Medy Elito found substitute Chris Dickson six yards from goal only for Dale stopper Josh Lillis to deny him